The science of sleep


We tend to be more interested in the things that we don't have. In my case, I have found sleep increasingly intriguing and mysterious. (Of course it has to do with the several insomnia patients around me as well.) I just wanna share some of the things I found:

- Although the entire body benefits from sleep, the brain suffers the most from lack of sleep. The most immediate, unavoidable effect of sleep deprivation is cognitive impairment.

- You think you will lose weight if you don't sleep much? Several studies, on the contrary, suggest that sleep deprivation is one of the causes of obesity. This may be happening because sleep deprivation could be disrupting hormones that regulate glucose metabolism and appetite.

- Sleep deprivation also makes you grumpy. Researchers at Harvard Medical School and UC Berkeley showed emotional-provocative images to volunteers after keeping them awake for 35 hours. They found out blood flow to the amygdala (an emotion-processing part of the brain) increased by over 60% in sleep-deprived brains. Some other studies linked this to the production of cortisol ("stress hormone").

- Feeling sleepy is different from being tired. Pure sleepiness can be conceptualized as the effect of central sleep-promoting mechanisms telling the brain it is time to sleep, whether or not brain cells need to do so. Examples are jet lag, food coma, or simply being in a boring environment. Pure tiredness can be conceptualized as the inability of brain cells to continue functioning in their normal waking mode, despite the central wake-promoting mechanisms telling the brain it should be fully alert. Do you really need examples for this?

- Multiple studies indicate that sleep may be a good time for consolidating and integrating newly acquired information in memory without interference from ongoing activities. The observation that neural circuits activated during learning are “reactivated” during sleep is consistent with this possibility.

- Researchers at UCSF found abnormal copies of DEC2 gene in those who need far less sleep than average. The gene is known to affect circadian rhythms and oxygen regulation in mammals. When the scientists bred mice to have the same mutation, the mice slept less and were more active than their regular rodent peers. I would be great to be a mutant!

Email ThisBlogThis!Share to TwitterShare to FacebookShare to Pinterest
Labels: sci-tech

Blind men and an elephant 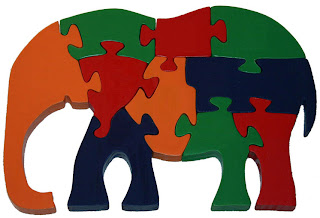 Buddha tells the story of eight blind men touching an elephant and trying to learn what it is like. The blind man who feels the elephant's tusk shouts out, "the elephant looks like a daikon radish!" The others disagree and assert that it is either like a dustpan (the one who touches its ear), stone (head), a pestle (trunk), a wooden mortar (leg), a bed (back), an urn (abdomen), or a rope (tail). Buddha continues and explains, these men see only one side of a thing. In their ignorance they are by nature disputatious, each holding a fractional view on reality as thus and thus.

As Spock would say, reaching a broad conclusion from limited evidence is not logical. It's called hasty generalization. Think about sustainability which everybody is obsessed with. One general belief is that paper is degradable but plastic is not, so it seems "natural" to conclude that paper bags are more environmental-friendly and we should all use paper bags instead of plastic ones. But this is just one side of the story. What about the trees we cut to make all that paper? In the manufacturing process, plastic bags only consume about 18% as much energy, and less than 3% of the fresh water necessary to make paper bags. According to an analysis by Franklin Associates, Ltd, during the life cycle of both types of bags per 10,000 equivalent uses, plastic creates 9.1 cubic pounds of solid waste vs. 45.8 cubic pounds for paper; plastic creates 17.9 pounds of atmospheric emissions vs. 64.2 pounds for paper; plastic creates 1.8 pounds of waterborne waste vs. 31.2 pounds for paper. When you see the big picture, the saint-like aura around paper bags disappears.

The same trend happens in the field of architecture. Architects are obsessed with green jargon. But how many really understand what it means? Geothermal for a small house? PV panels on the north facade? Yeah, I bet it sounds a lot fancier to say "solar energy harvesting from all around the building."

Another trend in contemporary architecture is the dominance of flashy images. Everything comes down to how it looks rather than how it works. Critics base their judgments just on images, and architects design only the images. We see beautiful renderings that intentionally avoid certain aspects of reality (Zaha's monolithic shapes or Greg's super-blobs?), beautiful photos with fantastic lighting that conceals the detailing flaws (can't forget this), and beautiful moments captured by tasteful photographers that glorify the entire building no matter how lame it is as a whole. Yes, we all love eye-candies, and we would like to believe that's reality. But unfortunately, we are all blind...
The consequences are severe. Everybody is lazified (Salute, J and J!). On the consumption side, the iconic official image has superseded the actual experience and use of architecture in our society of spectacles. People are sufficiently happy with what they see (mostly indirectly). Nobody would take the effort to verify the facts before believing, nor would anyone care to ask about the other side of the story behind the scene. On the production side, representation has replaced the building as the ultimate goal or final product of architecture. How to get it done? Does it actually work? Nobody cares. If people would buy the beautiful lies so easily, why bother trying to really figure it out? Competition? Well... "plans, sections, and renderings don't need to correspond - they just need to look all good." Construction? "I don't care when it really opens. Just hire a good photographer and we call it done." Here we hear a collapse of truth and responsibility.
We are blinded and we are blind. All this reminds me of horse blinders. It would actually be good if it keeps us moving forward. But piecemeal perceptions will only hold us back, or lead us to laughable ignorance...


I can't say I am a big fan of "organic shapes," but the Ron Arad show at MoMA had the power to engulf me in amazement. It's much more than just a fancy furniture showroom - the space itself is a masterpiece. A giant display structure (Cage sans Frontières) twists and unfolds the beautiful objects as it loops around the gallery. The morphing grid is made of Cor-ten steel, lined with polished stainless steel inside the squares and backed with stretched fabric. The installation functions not only as shelves that hold most of the exhibits, but a powerful unifying device that sets the general tone of the show. As it warps through the gallery, it divides the space into sections and at the same time creates connections and flips it inside out. 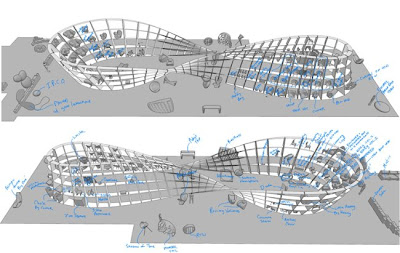 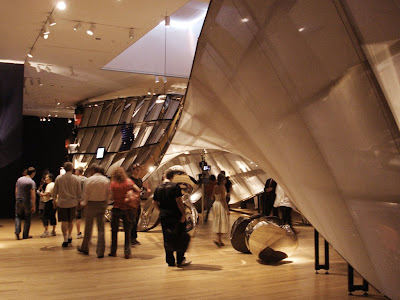 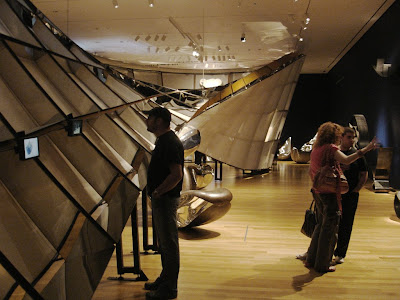 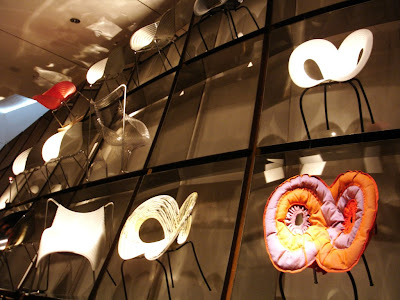 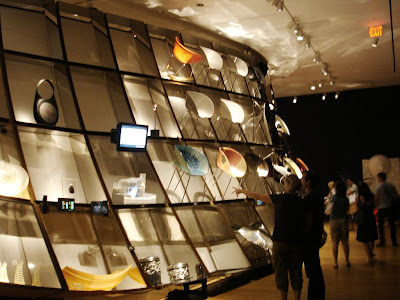 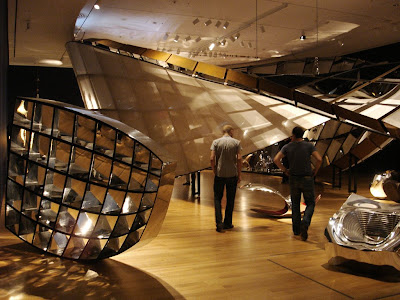 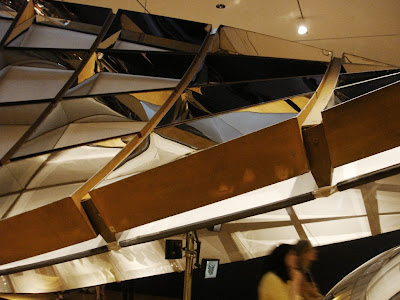 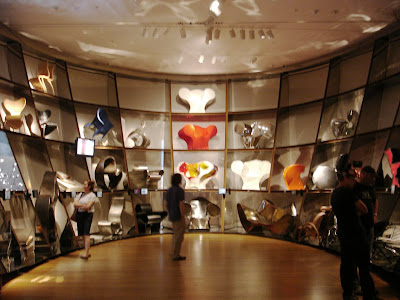 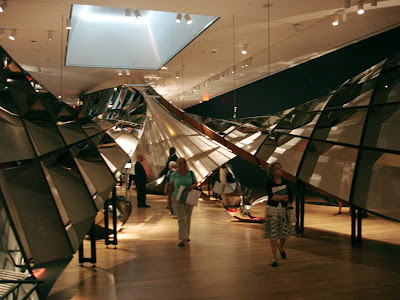 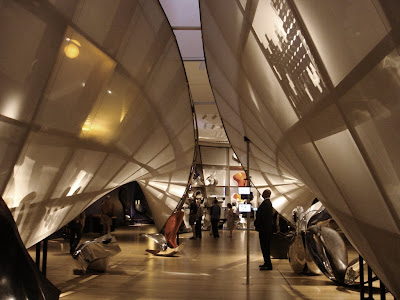 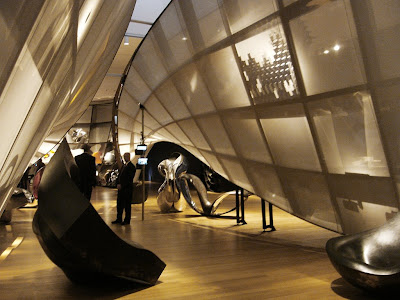 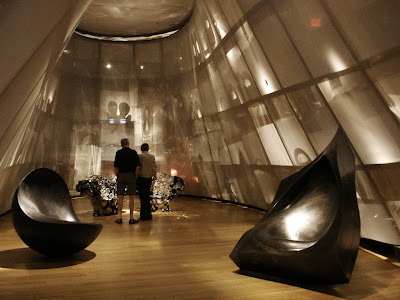 It's hard to describe Ron Arad's career. Industrial design? Architecture? Art? Maybe as the exhibition is titled, "No Discipline" can define his work. Of course, most people know him from his chairs, like Big Easy and Ripple Chair. His design has a certain 50s/60s sensibility that resembles Frederick Kiesler or Verner Panton, but the originality is undeniable. He dares to explore new forms, and more importantly, new materiality and manufacture techniques. I was most fascinated by this set of two chairs called "Even the Odd Balls?" (2008), a variation in the Big Easy family. Making the exact inversions out of stainless steel is both conceptually intriguing and technically challenging. 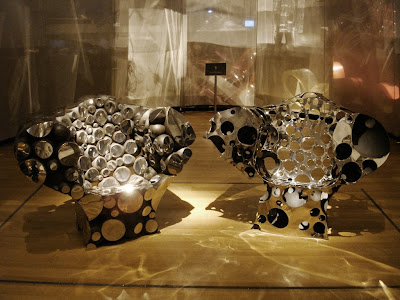 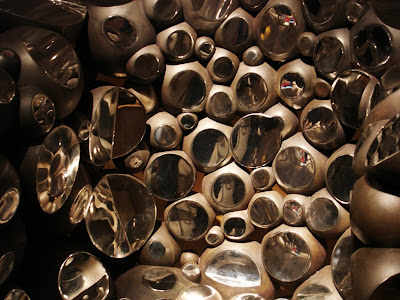 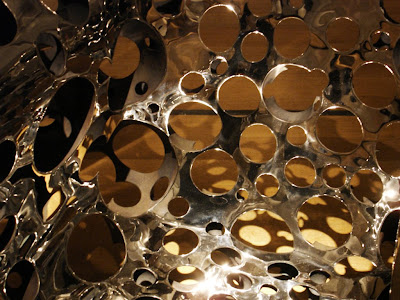 Some other objects picked from the show: 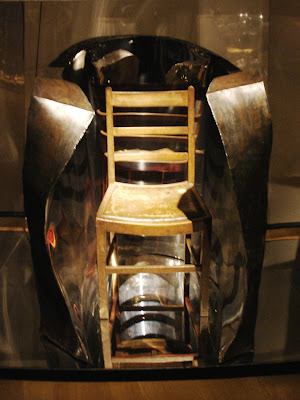 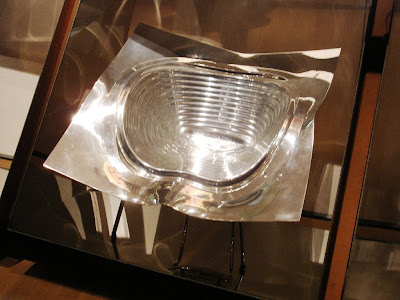 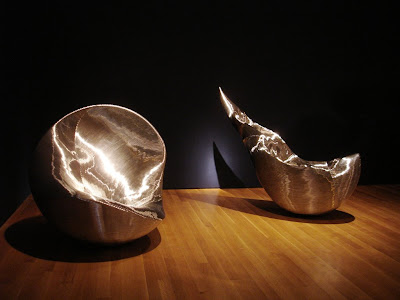 Thumbprint, 2007 (made of stainless steel rods) 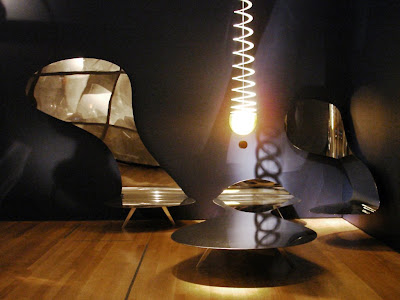 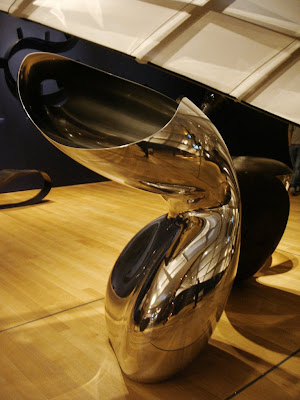 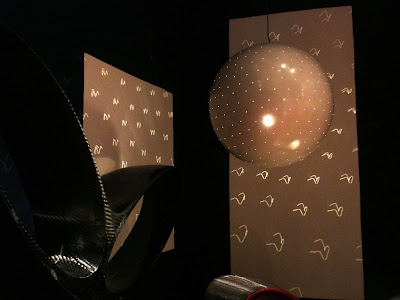 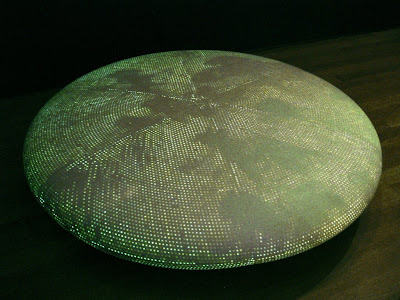 Lo-Rez-Dolores-Tabula-Rasa, 2004 (fiber optics projection from inside a Corian table)
I love this one: Ballpark (2001), a prototype developed for Ingo Maurer’s lighting company. A group of small rubber balls, each with a small mirror on it, catch the light and spell out words or images. The angle of each ball is individually manipulated so that the text reflected on the wall can be different from - even the opposite of - what is shown on the tray. Isn't it fun and ingenious? 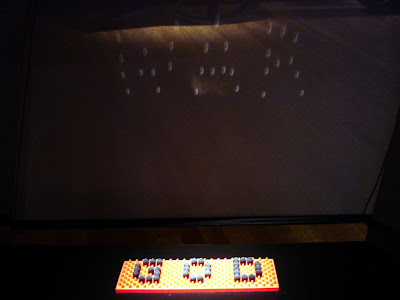