When the digital becomes physical

After three years of construction, the Museum of the Moving Image in Astoria reopened its doors on Saturday. The renovation/expansion was designed by Thomas Leeser, a Frankfurt-born architect who used to work for Peter Eisenman on signature projects like the Wexner and La Villette. I guess he's been on his own for quite a while now - this new building, probably his first significant built work, doesn't reflect much of his Eisenmanian background.

From 35th Avenue, all you see is the original 1920s white stucco building. The three-story new addition bulges out from the back as a dull and windowless big-box volume. Clad in triangular light-blue aluminum panels, the exterior tries to bring some interest with its dia-grid surface. But it seems to me that it's just a game of pattern making, and the treatment of open joints in different widths further confirms its decorative nature. Leeser talks about triangulation as a motif of the "digital," a science fiction language - like the virtual wireframe blueprint seen in Iron Man. Isn't that just a superficial and graphic interpretation of the emerging digital culture? 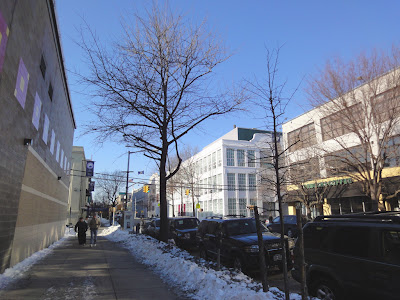 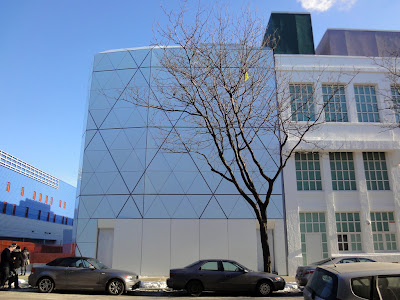 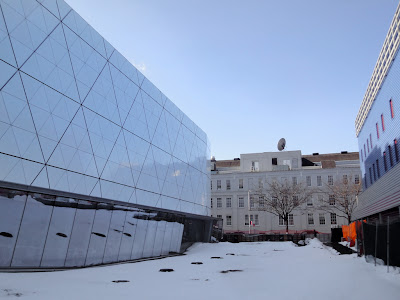 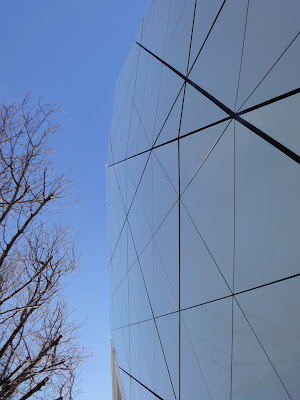 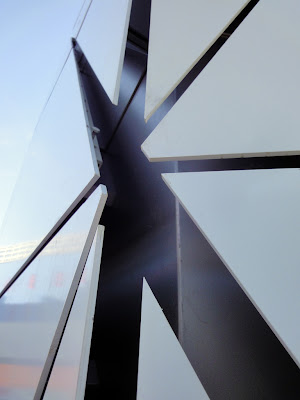 The main entrance is still on 35th Ave. Again, the triangles appear at the front door. The public spaces on the ground floor are blindingly white, so pristine that they make you worry how they may look like in a few years. (In fact, the polymer floor and the bottom of the painted gypsum walls have already become quite dirty after two days.) I guess when you render with white in the computer, it looks so good that you just want to stick to it. But the computer doesn't tell you how materials age through time in the physical reality. 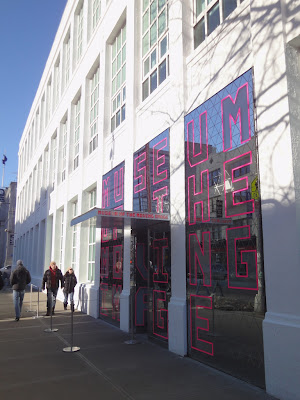 I am not trying to be 100% negative here. In fact, there are several interesting moments in the museum, especially in the circulation. As you move through ramps and stairs, the experience of the dynamic space unfolds as if in a moving picture. The impressive large pieces of Corian guardrails and benches enhance the seamless transition of space. 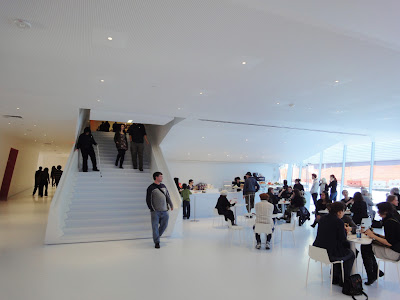 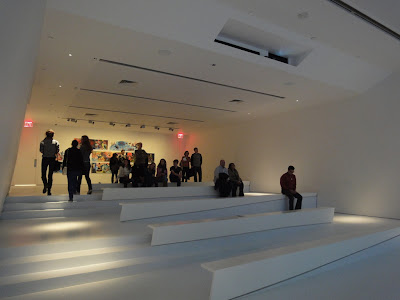 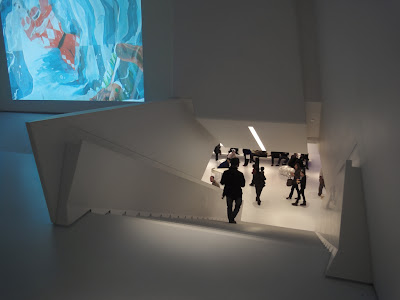 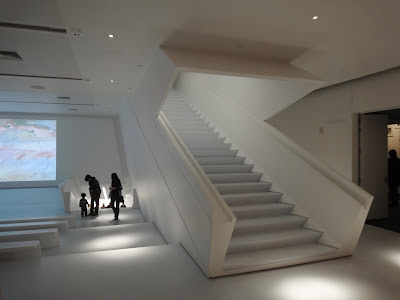 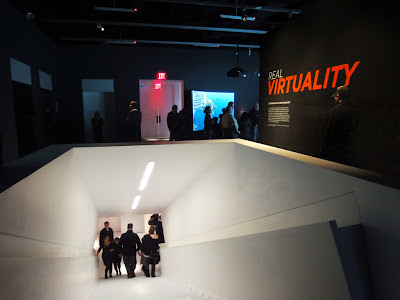 The exhibition itself is a good combination of the digital and the physical. There are physical set models, Star Wars action figures, antique arcade video games, as well as immersive digital projections, augmented sculptures, and interactive work stations.

Cut from the pristine white lobby, the access to the theater is a futuristic luminous blue tunnel. Inside the theater, the Cindy Sirko designed curtain bears striking graphics of something like a zooming cyberspace. On the walls and the ceiling, the triangular motif appears again, but in this case made of vibrant Yves Klein blue felt panels. When asked about the choice of color, Leeser explained, "blue is the color of the digital world." Oh boy, I thought the triangles are already very literal... 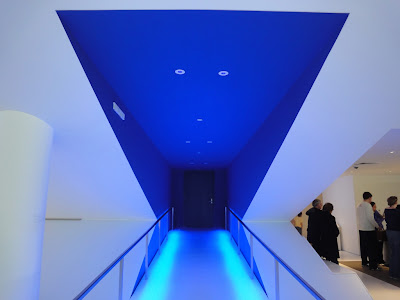 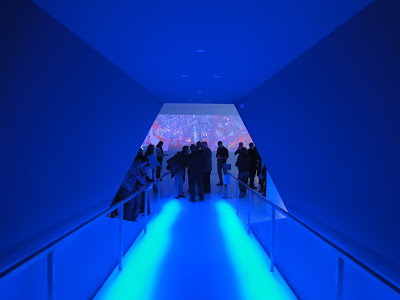 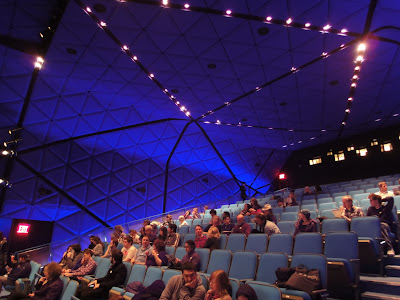 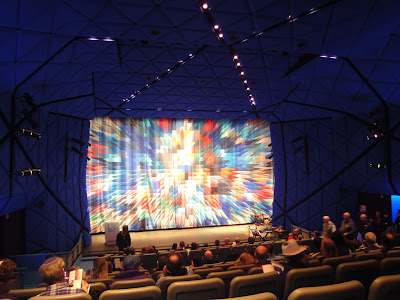 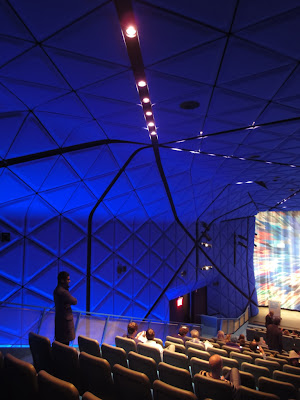 Email ThisBlogThis!Share to TwitterShare to FacebookShare to Pinterest
Labels: arch/design

In the middle of the vast atrium of MoMA stands a lone baby grand piano. This is not just a normal piano; the Bechstein has a large hole carved out in the center of its case! Is this a sculpture then, like those by Gordon Matta-Clark or some sort? But you know it's more than that - the reversed pedals give it away. The object seems like the wire that Philippe Petit put between the twin towers, quietly awaiting some magnificent performance to occur. 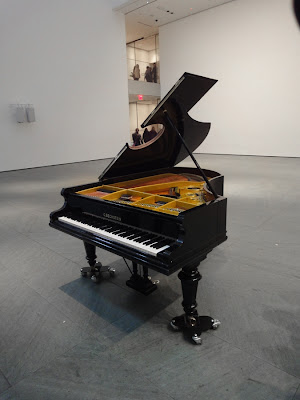 A performer approaches the piano, puts his hands on the rim and pauses. He ducks under the piano, and reemerges from the hole. Then he bends over and starts to play, from inside the piano, upside down and backwards. The relationship between the musician and the instrument is far more intimate than ordinary music performances. Here, the musician is part of the instrument. He inhabits it, like a hermit crab finds its shell. The two become a hybrid whole. 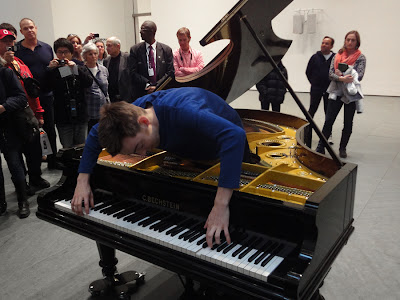 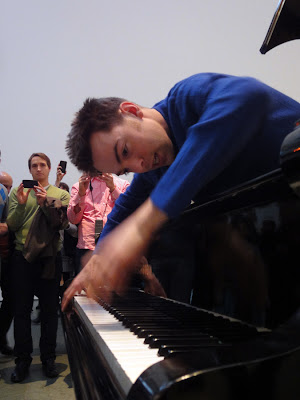 Once in a while, the performer pushes the piano and moves with it to a new location, causing the audience to move along. Seen from the upper levels, it almost looks like a shepher herding a group of sheep. Through collective choreography, the viewers/listeners participate as part of a spontaneous group dance. 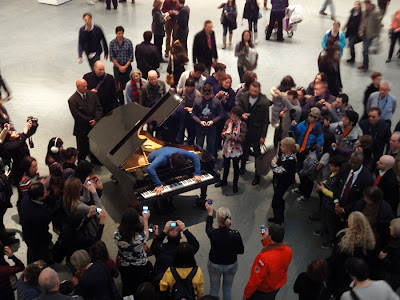 This is the performance piece by artists Jennifer Allora and Guillermo Calzadilla. Maybe it's because of the Christmas/New Year season, they picked Beethoven's Ode to Joy. By altering the instrument, they alter the music, in a way that reminds me of Marcel Duchamp and Andy Warhol's manipulations of Mona Lisa. The hole removes two octaves of strings, so the music is recognizable but incomplete. When it gets to the middle section of the keyboard, the notes are reduced to mere percussive sounds produced by the fingers hitting the keys. Due to physical constraints, the performance itself is by no means perfect. But it's exactly through this imperfection you see the performer's effect and vigor. Someone from the audience says, "Poor guy! He has to unlearn everything he learned to do this." This is precisely why the performance is so charming. On top of the physical challenges, there are psychological endeavors involved. This is a true ode to joy - the joy of passion; the joy of love.